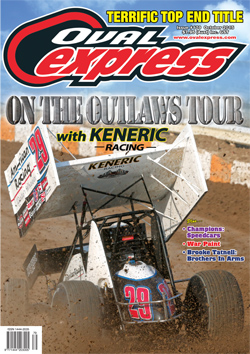 ON SALE AT NEWSSTANDS AUSTRALIA-WIDE SINCE OCTOBER 12, 2015.

FEATURED IN THIS ISSUE:

* RUNNIN THE MONTH OF MONEY  Part 1
Have you ever wanted to go on the road with a professional World of Outlaws team during their busiest month? The Oval Express editor did, surviving (Just!) the arduous mission to compile a comprehensive behind-the-scenes depiction as part of the Keneric Racing team. Our Month of Money journey begins as Kerry Madsen defends his Kings Royal crown.

* WAR PAINT
We begin our annual celebration of style, show-casing some of the more imposing racing machines to be revealed across the nation so far this season.

* CHAMPIONS  SPEEDCARS
Our annual ranking of the countys finest Speedcar racers of 2014-15 features a fascinating mix of youth versus experience. With the time-honoured division set to celebrate its 75th Australian Championship in Australias largest city early next February, theres plenty to get excited about within the mighty midgets.

* TRIUMPHS IN THE TOP END
Many have heralded Darwins hosting of the 2015 Australian 360ci Sprintcar Championship as the finest in the divisions history. Not only was the new Northline Speedway racing surface a hit, the event marked the highpoint of the successful comeback for a Western Australian star.

* Plus plenty of new-season news and announcements...