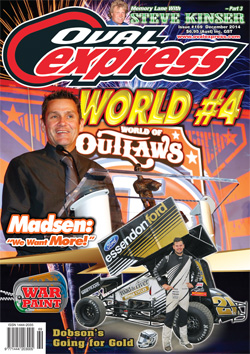 OVAL EXPRESS MAGAZINE GIVES YOU MORE CHOICE!
Not only can you continue to purchase the fine quality printed version of Australia's Premier Speedway Publication, now you can buy each edition of Oval Express Magazine in a digital format. - SIMPLY download your free Magshop app from the App Store, and then search 'Oval Express Magazine' to purchase.

FEATURED IN THIS ISSUE:

* BEATING THEM AT THEIR OWN GAME
Years ago Sydney's Kerry Madsen packed his bags and headed Stateside, armed with nothing more than a dream to one day beat the world's best Sprintcar drivers in their own country. Now, with able backing from WA businessmen Bob and Peter Gavranich, Madsen is achieving his lofty goal, having collected some of American Sprintcar racing's biggest prizes in 2014.

* MEMORY LANE WITH THE KING - Part 3
The only way to adequately complete our extensive and enthralling trip down memory lane with the renowned 'King of the Outlaws' was to be trackside in Charotte, North Carolina for Steve Kinser's final race as a full-time competitor. And, trust me, there wasn't a dry eye in the house as the Bad Boy Buggies #11 led the four-wide parade for the final time!

* WAR PAINT II
The preparation and presentation of speed machines all across the nation is setting new standards this season. For evidence of this statement, just take a look at our second crop of outstanding examples.

* GLOBAL WAUGH
Jay Waugh spent his off-season ticking off a proverbial 'bucket list' item. The up-and-coming Canberra-based racer headed to American's Midwest, took the wing off, and proceeded to compete against the best non-wing racers in the business over the arduous seven nights of racing in nine days that comprise Indiana Sprint Week. Surely an experience he'll never forget!

* PLUS
Plenty of news from across the world of dirt track racing.