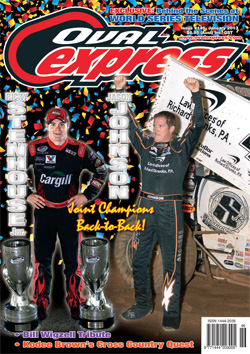 * Jason Johnson and Ricky Stenhouse Jnr.
- Success is part of the culture for this multiple American Sprintcar champion and his back-to-back NASCAR Nationwide Series championship-winning business partner and good friend.

* World Series Television
- We take you behind-the-scenes with WSS's new television and Giant Screen contractor Mediatec Asia Pacific to discover how they're diligently working to change the profile of Australian Sprintcar racing.

* Kodee Brown's Cross Country Quest
- In a massive stretch of his resources, this Broome (WA)-based Sedan young gun has packed up his entire racing operation and gone on the road with the National Super Sedan Series for the entire 2012-13 tour.

* And all what's making news from around the nation...